We have a first! Producers can finally bring homemade cakes to sell at the market - provided they have made at least one of the ingredients. Yum! We all love cake, I think. So this should offer some special flavours as we get to taste what our talented artisans bake when they're not making their jams and cordials, oils and vinegars, hams or cheeses. 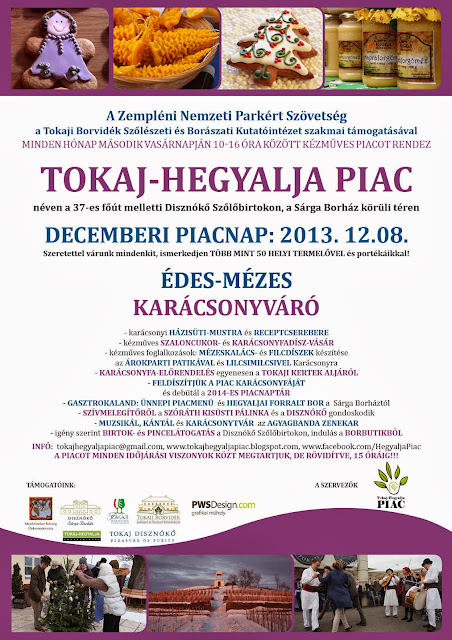 Sitting around together in Kriszta's kitchen, we admired the wall calender - and decided to make one to celebrate the market. We have plenty of photos to choose from and it looks great. It will be available at the market on Sunday 8th. As well as colourful and inspiring images from markets past, the calender also gives you the theme for next year's markets AND dates for the best festivals in the year. Truly a way to help make sure you know what's going on in the Tokaj Wine Region has to offer! (Next year's themes in our next post.)

Back to this December's programme:
- Christmas HOMEMADE BAKE OFF and RECIPE SWAP
- handmade SWEETS and CHRISTMAS TREE DECORATIONS
- workshops: DECORATE HONEY CAKE and FELT FUN with Árokparti Patiká and Lilcsi milcsi
- ORDER YOUR CHRISTMAS TREE direct from a TOKAJ NURSERY
- we'll decorate the MARKET CHRISTMAS TREE
debut of the 2014 MARKET CALENDER
- GASTRO-ADVENTURE: festive MARKET MENU and MULLED WINE at the Sárga Borház
- HEART-WARMING SZÓRÁTH KISÜSTI PÁLINKA and DISZNÓKŐ wines
- music - as always - and with our favourite AGYAGBANDA ZENEKAR
- visits to the Disznókő ESTATE AND CELLAR starting from the WINE BOUTIQUE

Hope to see see you there!


Posted by Tokaj Hegyalja Piac at 14:57 No comments:

The September market had mushrooms and grapes in the focus and I wanted to continue what I started last year - interviewing the producers about their speciality. How did they get into it? What has their path been like so far? And where would they like to go? I asked a new face (who grows lingzhi mushroom or reishi mushroom) and a familiar one (oyster mushrooms) to tell us more about their journeys. 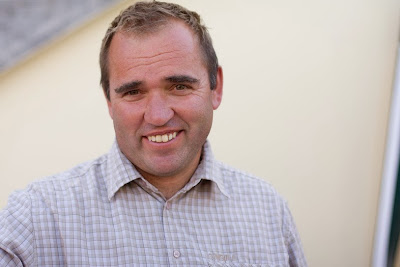 First our regular stall holder, the owner of Tokaj Gomba who started growing oyster mushrooms in his cellar five years ago. After starting with 70 bags, he learnt from experience about the need for oxygen and water - continuing despite a couple of setbacks. He now has 350 bags - one of which he brought to the October market for people to see. As I probably would have realised (had I thought a little longer) there are many strains of oyster mushrooms too - with different temperature requirements etc. And also that, as a fungus living on trees, it needs oxygen - so he had to ensure air-flow (not the case for button mushrooms). He told me a little about how he produces his strain...

First straw is chopped up and then steamed to sterilise it, before being put into large bags with holes for the oysters to come out of. After about a month - depending on the heat and time of year - these delicate mushrooms start to appear. The bags keep producing for a couple of months - until only about one third of the organic matter remains. (This is then perfect for amateurs as the bags still produce, just not as abundantly and, finally it makes excellent compost for gardens!) 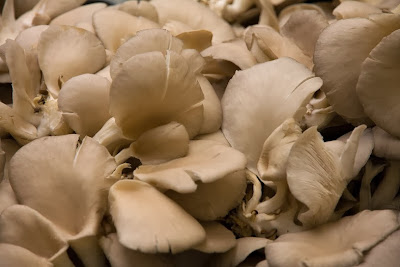 And what does he do with the oyster mushrooms? Fragrant and deliciously silky.
Well, he sells them fresh.... 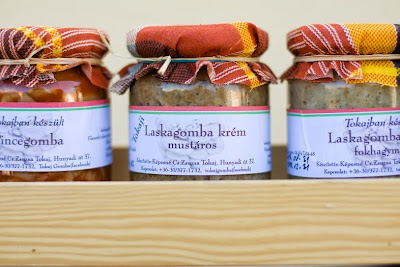 And bottles them too, experimenting with different herbs and flavours. He makes parsley, rosemary, thyme garlic and mustar seeds - as well as the new product in the range: cooked in tomato and wine. Yum. They're great with toast, meats and cheeses. Definitely worth a taste! 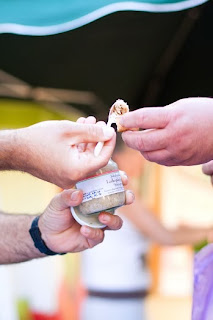 Suri Attila and his wife decided they wanted a new start and a more relaxed pace of life. They knew that they wanted their business to reflect a conscious way of living, bringing health to themselves and those around them. After floating many ideas, they decided on the Lingzhi mushroom, the most well-known of the medicinal mushrooms which also has the greatest health-giving properties they say. It strengthens the immune system and helps prevent numerous conditions as well as being useful in detox. Not only that, it can be used in creams and soaps which can help treat excema. 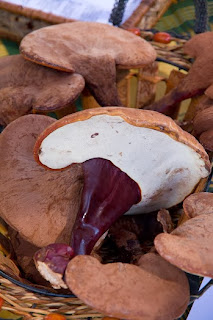 They converted their cellar, so their workplace is also at home. Since the spores contain the highest quantites of the active ingredients, they wait for the mushrooms to open before drying them and grinding them to a fine powder. They have received many compliments on the fineness of the grinding - and said this was the result of much trial and error. This is what I love about artisans, their desire to experiment and attention to detail. The fineness means the powder is less noticeable in the drinks - they recommended coffee, milk and as a tincture as carriers. It can be used as a detox to give a general boost (1g a day for three months) or more intensively to treat existing conditions. 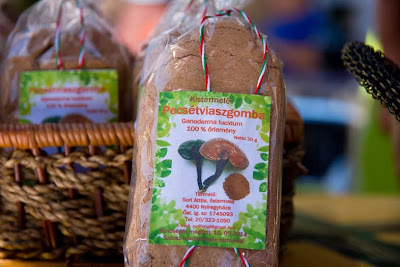 A little more about Lingzhi... It has been used as a medicinal mushroom in traditional Chinese medicine for more than 2,000 years, making it one of the oldest mushrooms known to have been used medicinally

This is an edited extract from Wikipedia on some of its benefits:
"Lingzhi possesses anti-tumor, anti-cancer, immunomodulatory and immunotherapeutic qualities. It has also been found to inhibit platelet aggregation, and to lower blood pressure, cholesterol, and blood sugar. Laboratory studies have shown anti-neoplastic effects of fungal extracts or isolated compounds against some types of cancer, including epithelial ovarian cancer. (Lingzhi) Ganoderma lucidum extracts are already used in commercial pharmaceuticals. It is reported to have anti-bacterial and anti-viral activities. (...) to exhibit direct anti-microbial properties with the following organisms; Aspergillus niger, Bacillus cereus, Candida albicans, and Escherichia coli. Other benefits were studied such as the effect of lowering hypertension, cholesterol, and anti-inflammatory benefits through the ganoderic acid properties."

And just one final word of thanks to the ZGE, the local mushroom and fungus society, which joined us again this year with a wonderful variety - despite the relatively dry conditions) 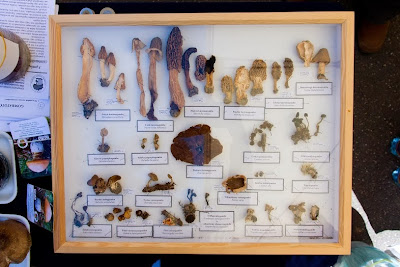 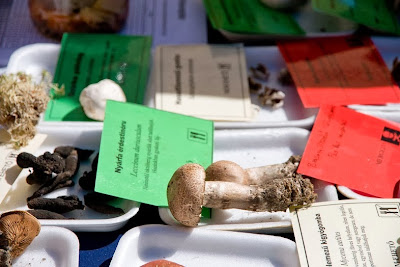 Posted by Tokaj Hegyalja Piac at 14:43 No comments: 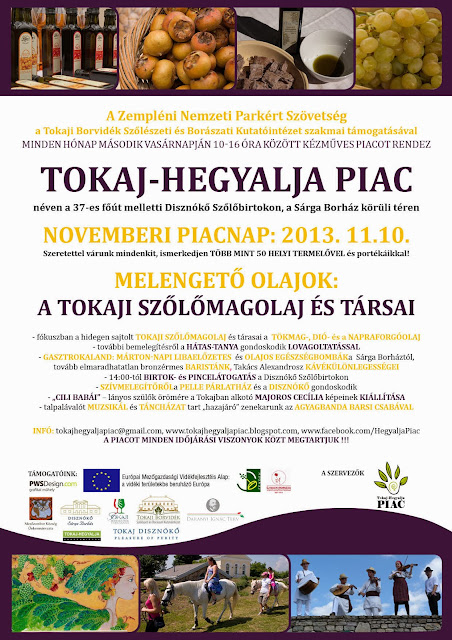 Posted by Tokaj Hegyalja Piac at 08:32 No comments:

Tokaj Hegyalja Piac
Sárga Borház, Disznókő, Mezőzombor, Borsod-Abaúj-Zemplén, Hungary
• To provide the opportunity for local artisans (they all come from the county plus a 40km radius) to promote and sell their wares without travelling a great distance. • Local craftsmen and women who bring their handmade products: - cheese and meats, jams and honeys, vinegars and oils, (organic) fruits and vegetables, spelt flour and pillows, bakery goods... - pottery, soap, wooden toys, jewellery, clothes - and lots more! N48.165387 E21.303306

•To introduce locals and visitors alike to some of the treasures available in the Tokaj Wine Region and the surrounding area, as well as their skilled creators.
• Deepen links between producer and consumer, facilitate feedback and exchange of knowledge
• Community building :)